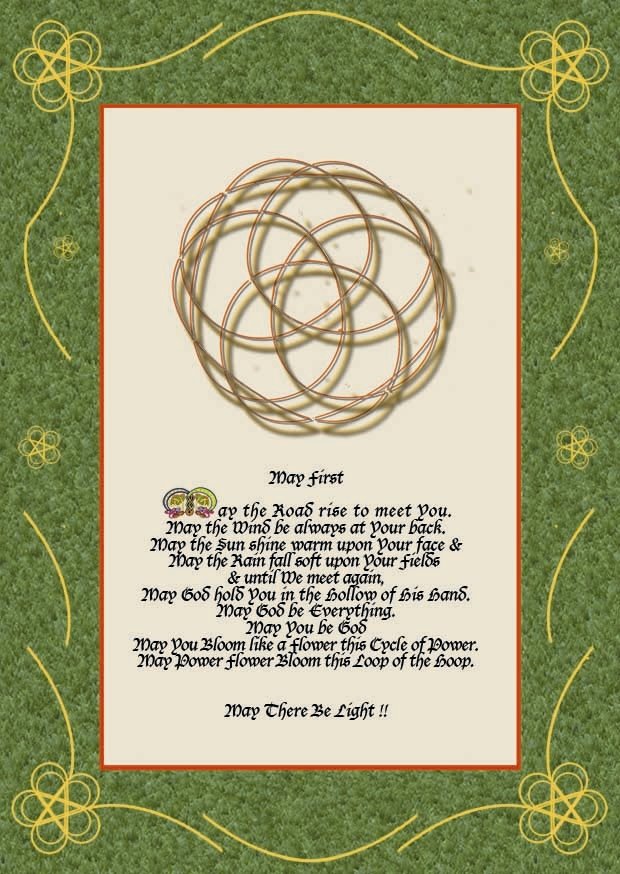 Jack O'Lantern tricked the devil by luring him up an apple tree, then carved a cross on the trunk so the devil could'nt escape untill he promised Jack he would never send him to hell.
After living a life of Freedom and Joy he died, could'nt go to hell, but God sure did'nt let him in after the life he had! So where to go? He thought to himself, when the devil, just to tease him, threw him an everglowing ember from hell. He carved out his favorite root, and put in the everglowing ember from hell and found his Own Way ever since.

Cailleach, the old three faced Mother of All stirs her magic wand in the Cosmic Cauldron of Life and Rebirth. This magic pot holds infinity's primal soup of Plenty and never emptied.
Creating, destroying and constantly transforming and renewing Life.
She washes her plaid in this Cauldron during fall, untill it is crispy white and ready to be laid out over the world in winter. even dead hero's end up in it and are made whole by it in the Otherworld.

This night was considered the perfect time for divination and fortune telling.

As a ritual for purification people would walk between two bonfires, or dance around one to please the spirits.

During this festival just after the last harvest, people would weave harvest love-knots from reed, straw, wheat or corn and give them to the One to marry in spring during Belthane's festival. http://www.mrsmurphys.com/Irish%20Wedding%20Traditions.htm

The children would be protected from evil spirits by disguising as one to blend in.

To spare the house another year, the harvest would be shared with these spirits, and offered to them, and the disguised children posing as these spirits.

For more protection a devil's face can be carved out of a root or pumpkin and hung outside, to scare evil spirits away, while the light inside serves to guide loved spirits home.

Paul Bruno
Ouderkerk aan de Amstel, Noord Holland, Netherlands
Been doing all sorts of art stuff for quite a while like studying to be an art teacher, but only worked as one for 3 months. Had a company called Arti Parti-Multi Medial Happy Happenings- for 5/6 years, but got so fed up with all the paperwork I decided to focus on doing things from the heart. Squatted Amstelrust and did 24h Open Sundays for four months with a big Belthane celebration as a Grand Finale. Then squatted 'de Sollenburg', a farm further along the Amstel river where we will soon be celebrating our 3 year anniversary of living off the Main Grid since Belthane 2006. It's a paradise, including Eden's apple trees. I find or get what I need, when I need it. Been specializing in geometrical constructions from bamboo and from that developped: the Power Flower (C) Working hard on manifesting a live size bamboo dome based on the Power Flower's infinite woven structure now. POWER FLOWER'S FIRST WORDS: IO SONO THE PARENT AND CHILD OF THE HOOP, AND THE STRAIGHT LINE. FOLLOW ME TO STARDOME, OBLIVION, AND BEYOND. I AM YOUWOMANITY...